Ask the Research Doctor a question.

Forum rules
How do you ask the Research Doctor a question?

Your question is submitted annonymously unless you include your name.

Click "Submit" and then check back to find Dr. Wimmer's answer to your question.

If you wish to have a private answer to a question (not posted in the forum), please include your email address. Dr. Wimmer will send your answer directly to you.

Dr. Wimmer maintains an Archive of questions from the forum. Go to http://www.rogerwimmer.com and click on "The Research Doctor Archive" link.
Post Reply
1 post • Page 1 of 1

Doc: I heard through the grapevine that you attended the KFI/KOST/KACE Reunion party in Pasadena, CA last week. Is that true, and if so, how was it? - Anonymous

Anon: Grapevine? What grapevine? However, it is true that I was there. I was invited because I conducted research for all three radio stations for many years, starting in 1982. The party was one of the nicest events I have ever attended. If you’re on Facebook, you will be able to find many photos of the event.

However, here is one I took of four of my good friends, all rather influential radio people. From left: Mike Sakellarides, Mary Catherine Sneed, Tom Leykis, Jhani Kaye. By the way, they are standing next to Tom Leykis’ Tesla – what an amazing car! 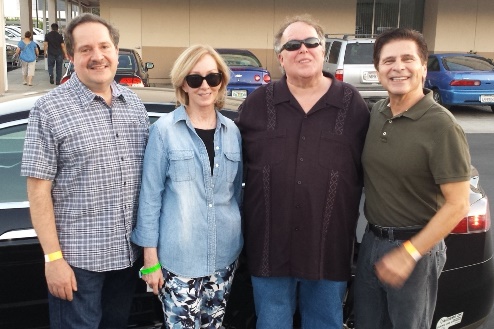 Note: Many people at the Reunion have posted several photos on their Facebook page.

(Want to comment on this question? Click on the POSTREPLY button under the question.)
Roger Wimmer is owner of Wimmer Research and senior author of Mass Media Research: An Introduction, 10th Edition.
Top
Post Reply
1 post • Page 1 of 1